We are working with Film Infinity to create a series of films that capture our progress on site at Mulberry Park.

Construction progress from ground breaking in Spring 2017. The new £10M community hub, school and nursery will open end of 2018.

Construction of the first new roads, drains and homes at Mulberry Park started in Spring 2016. Watch these time lapse films to see what has been happening on site.

Mulberry Park - a new destination in the city of Bath

Victor Da Cunha (chief executive of Curo), Amy Lodder (local resident) and Cherry Beath (ward councillor) discuss the development of plans for Mulberry Park and the regeneration of areas of the Foxhill estate to create a vibrant and sustainable community in Bath.

From Foxhill MOD to Mulberry Park - the journey so far

The first film shows the demolition of the former MOD buildings on site in Summer 2014.

The brownfield site is located to the south of Bath city within Combe . It is a similar size to Bath's Royal Victoria Park. 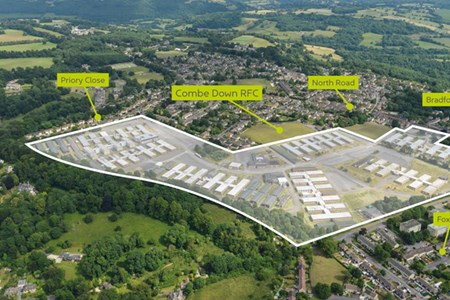 Homes for sale at Mulberry Park