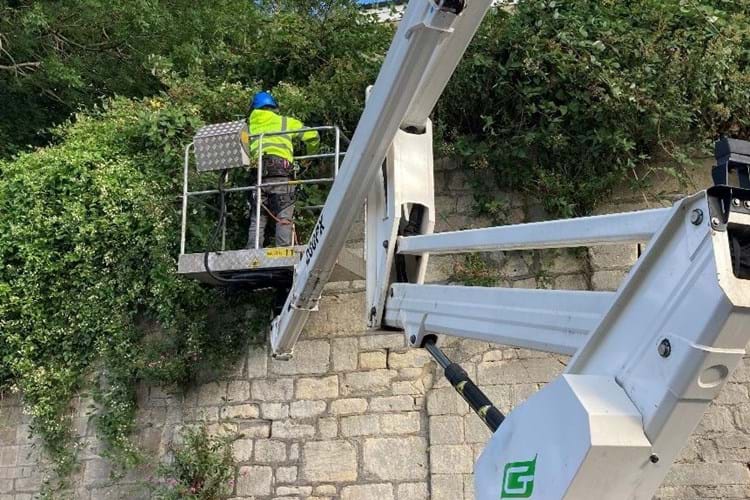 We love trees, so having to fell one is avoided if at all possible. For every tree we fell, we replant one somewhere else suitable and that’s what will happen in this case.

A mature ash tree was growing on top of a large retaining wall which separates Curo land from the highway at Mezellion Place. Unfortunately, following a structural engineer’s report it was recommended that the tree was removed before repairs were made to the wall.

A residential street, a highway (Camden Road), a bus stop, bench, footpath and overhead fibre optic lines would all be potentially impacted if the tree or wall were to fail. 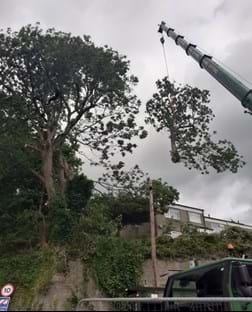 Once the crane was in position and the wall had been cleared, 2 Gristwood and Toms climbers tied anchor points high into the tree canopy. They worked together and communicated with the crane operator to remove the tree in a safe and controlled way. They did this by splitting up – 1 climber remained high up in the canopy, the other stayed around a third of the way up the height of the tree. The climber at the top then fixed a heavy-duty rigging sling to a section of the tree and moved to away to a safe distance. The second climber did the cutting. Climber two then also moved to a safe distance and communicated to the crane operator that they were ready. The crane lifted the cut piece away from them and slowly brought it down to the Gristwood and Toms operatives waiting to process it. This method was repeated all day with the last piece of timber coming down safely at 2pm, weighing in at over 5 tonnes!

The crane left site at 3pm and the clean up began. The BT Openreach team were able to move back into site and re-instate all the overhead lines which had been removed some hours before. The team had a tight deadline – a fully booked pub on Camden Road ready for a Lions rugby game which started at 5pm…at 4.57pm the Wi-Fi kicked in, which came with a cheer from the pub. The team from Gristwood and Toms continued to work to clear the site of timber and have the road ready to open. This was achieved at 6.30pm and the last to leave site were the operatives from Nationwide Traffic Solutions who had the road opened again and the bus stops re-instated by 7pm. 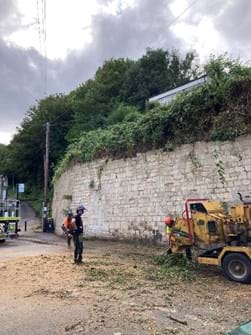 Multiple trades worked together on a relatively small and complicated site safely and efficiently, all the while engaging with the public when necessary and ensuring that businesses on Camden Road could stay open and have limited impact on their passing trade.

Curo replace every tree we have to fell.For obvious reasons we won’t replant in the same location in this instance, however come the planting season (October-March) we will ensure that the number of trees planted across our estates matches or exceeds the number we have had to remove.

A big thank you to Gristwood & Toms , King Lifting, Nationwide Traffic Solutions, BANES Streetworks and to everyone who lives nearby for their patience.

Find out more about how we manage and look after trees across our estates here.