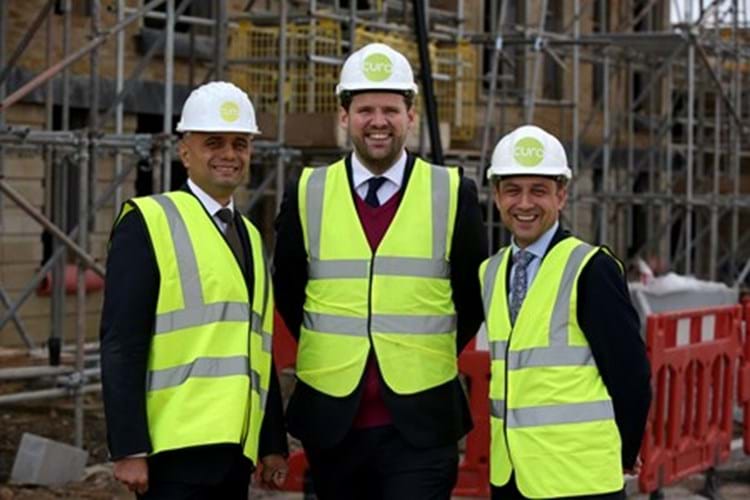 Secretary of State for Communities and Local Government Sajid Javid visited Curo’s landmark development at Mulberry Park today to see our progress in delivering much-needed new homes for the city.

The Secretary of State was accompanied on the site visit by local MP Ben Howlett and Curo Chief Executive Victor da Cunha.

Mulberry Park is a major scheme, being built by housing association Curo.  The development of the brownfield site will deliver 700 high quality, energy efficient homes – of which 30% will be affordable housing - a new primary school and nursery, a community hub, a park and public open spaces.  During the development, the local economy will benefit from construction jobs, apprenticeships and training opportunities.

On site, Sajid Javid MP saw the new townhouses that line the central avenue into the scheme, built using local materials including Bath stone.   The roofs have been completed on several of the new homes and the first residents will move into Mulberry Park in Spring 2017.

Mr Javid said: “I’m struck by the progress that Curo is making to bring back into use a formerly derelict brownfield site.  This scheme and others like it in the South West are designed to deliver growth in the local economy.

“It’s impressive that in the space of 36 months Curo has acquired this site, obtained planning, started construction – and the first residents will be moving in at Easter.  Housing Associations are key partners in delivering the government’s target of 1 million new homes”.

Mulberry Park will make a significant contribution to meeting the need for more than 12,000 new homes across the Bath area by 2029, identified in the council’s core strategy.

During the visit, Sajid Javid MP met Nick Hoskins, a local resident who is completing a carpentry work placement at Mulberry Park.  Nick told the Secretary of State how much he is enjoying gaining valuable hands-on experience working alongside experienced carpenters on the construction site.  Nick is one of a number of local people benefitting from skills, training and employment opportunities created by Curo, our contractors and our education partner Bath College at Mulberry Park.  By 2020, Curo aims to deliver 100 work and educational placements, 70 jobs with training and 15 apprenticeships at Mulberry Park.

Curo Chief Executive, Victor da Cunha said: “We’re a business with a social mission at our heart, committed to providing affordable housing and opportunities for local people in Bath.  We’re proud to be investing in Mulberry Park and Foxhill and making such a vital contribution to the local economy - delivering warm, secure homes, outstanding community facilities and beautiful open spaces alongside training and employment for residents.”

Mulberry Park, alongside the proposed regeneration of the Foxhill estate, was designated as a Housing Zone by central government in 2015.  In October 2016, B&NES Council approved a Charter setting out its shared ambitions for the Housing Zone with Curo and the local community.

Victor da Cunha said “The Foxhill Housing Zone is a scheme of national and local significance.   We’re delighted to show the Secretary of State the first new homes as they near completion.  We are grateful for the support we are receiving from the government and the council to create new homes and a long term sustainable future for Foxhill.”