Home / News / News stories / Plans for new Bath park given the green light – but what should it be called?

Plans for new Bath park given the green light – but what should it be called? 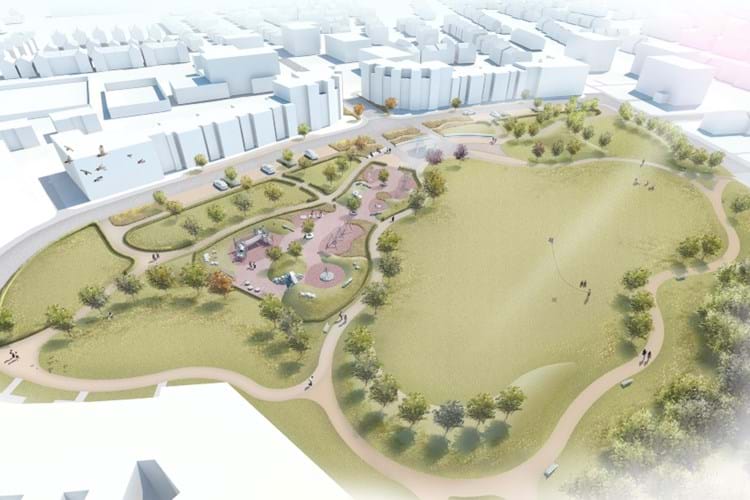 Image above: illustrative bird's eye view of the new park

Curo have secured planning consent to create a new park at their development of almost 700 homes at Mulberry Park in Combe Down, Bath. Now, the housing association and housebuilder is asking local residents to get involved in a competition to find a name for the new community open space.

This is the final major planning application to be determined by Bath & North East Somerset Council for Mulberry Park, after the fourth and last phase of development was granted detailed planning permission in July this year.

Curo Chief Executive, Victor da Cunha, says: “Local residents, stakeholders and B&NES officers have helped us to develop and refine proposals for a new park that is beautiful, inclusive and can be enjoyed by people of all ages; we’re delighted to be able to start works on the public open space soon.

“We want to continue the tradition we’ve established at Mulberry Park, of celebrating the area’s history, its people and their contributions to community and country and we’re inviting residents once more to choose a name – this time, for their new park.

“The development itself was named by local resident Ken Cookes in 2014, to reflect the city’s long military history and celebrate the Mulberry Harbours, designed in Bath by the Admiralty and used for the D-Day landings in World War 2 – while the streets in Phases 1 and 2 at Mulberry Park have been named after the young men of Combe Down who served in the First World War. We’re keen to continue working with the residents in naming these new local landmarks.

“So if you have an idea for a great name for the park, we’d love to hear from you!”

The new park will include an equipped play area for ages 2-11, as well as a picnic zone, flexible event spaces, areas of wildflower meadow, sensory planting, and hedge and tree planting to encourage biodiversity. Curo will also look at developing a centrepiece for the park, such as a bandstand, to support cultural activities.

In addition, footpath links will facilitate access to the park from the development and the wider area, while the Woodland Walk, which will be created north of the park, will connect the community to other places in Bath via Pope’s Walk.

The park, which was granted planning permission by B&NES officers via delegated decision, will open in 2022. The case officer’s report highlighted that “the proposed park will provide an attractive area of public open space with a mix of uses and activities which will cater to the needs of the newly established community at Mulberry Park.”

Enter the fun with the Curo in Bloom 2020 competition!
Supporting the community through the Coronavirus lockdown
Our construction sites are closing Friday 27th March
Join us to celebrate the 75th Anniversary of VE Day
‘Love Snow Hill’ launches in Bath
Taking care with Curo's caretakers
Recycling your Christmas tree
Congratulations to our 2019 Christmas Card Competition winners!
Congrats to Ellen, our first Countdown to Christmas winner
Enter Curo's 2019 Christmas Card Competition... you could win £50