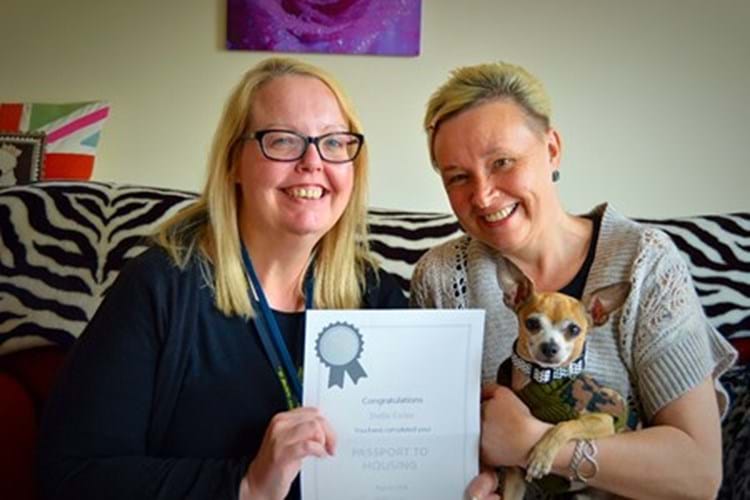 Keynsham resident Della was hit by the 'bedroom tax' which reduced the support she could get to cover her rent. Della talked to us about how using our Passport to Housing service helped her to take charge of her money and move into a new home that she could afford.

"Before Passport to Housing I was struggling with my finances. I was affected by the bedroom tax as my daughter had moved out. I didn’t want to fall into arrears, but I didn’t think there would be any way I could move... I really felt there was no way out of my situation.

"Passport to Housing helped me with budgeting, reducing my outgoings, and I realised I'd have to sell my car as I could no longer afford the upkeep.

"Curo applied for a Discretionary Housing Payment to cover the bedroom tax shortfall for a while. This gave me breathing space to look for a smaller property and meant I didn't fall into rent arrears.

"When I found a suitable property, Curo secured a week’s rent up-front and covered the moving costs from welfare support.

"In May this year I moved into my dream home, and I don’t need a car it's so central. I’m on cloud 9!

"Passport to Housing has given me confidence and control of my finances. I would say to anyone thinking about Passport to ‘do it!’"

Get your Passport to Housing

Claiming Universal Credit with a child turning 16? You may need to update your Journal
COVID-19 fuel top-up vouchers available for B&NES residents
Moving onto Universal Credit? You'll now get up to two weeks' run-on payment
TV licence fee for over-75s: 1.3m could be missing out on this exemption
Curo Hot Topics: What to do if you’re struggling with money or rent because of COVID-19
COVID-19: Benefits and support announced in Budget
Rent on time - never be in arrears again
Ditch the post, save a tree! Get your rent statements online
Curo Customer Accounts Team gains Housing Quality Network accreditation
Offered a debt-free solution? Check before you leap