Home / News / News stories / No Mow May: A neighbour's view

No Mow May: A neighbour's view

This spring Curo took part in the nationwide No Mow May initiative. No Mow May encourages people to give their lawnmowers a rest for the month and allow the grasses to grow and wildflowers to bloom. Guy Hodgson, who lives at Southlands in Bath, shares his reflections on the impact of No Mow May on Southlands Green and the biodiversity he spotted this year.

The long period without mowing during the first 2020 lockdown showed the variety of seeds contained within Southlands Green. In 2021 'No Mow May' has been trialled to experiment with strategies to increase biodiversity whilst keeping the visual appearance and recreational use of the Green in keeping with the preferences of maintenance levy payers.

In a nutshell the reduced mowing allowed more species of plant to emerge and for them to flower for longer periods. The flowers are dominated by white and yellow varieties. These are important during early spring and they provide food for invertebrates prior to many other plants coming into flower. 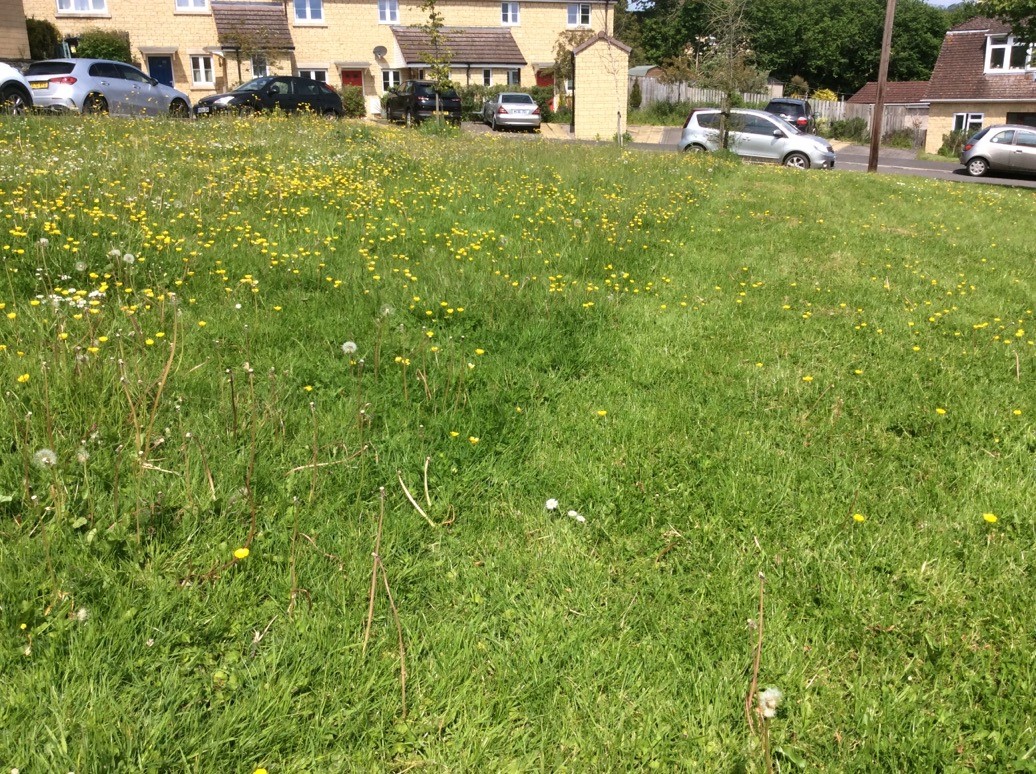 Although the vegetation is somewhat longer, shorter grasses still dominate. Perhaps what is most noticeable is the proliferation of meadow buttercups which are a relatively tall variety. This can be clearly seen in the photo below.

The length of grass might not be acceptable to people on their front lawns, but on a communal space which is distinctly separate from homes, it does not look incongruous (though a matter of opinion of course). 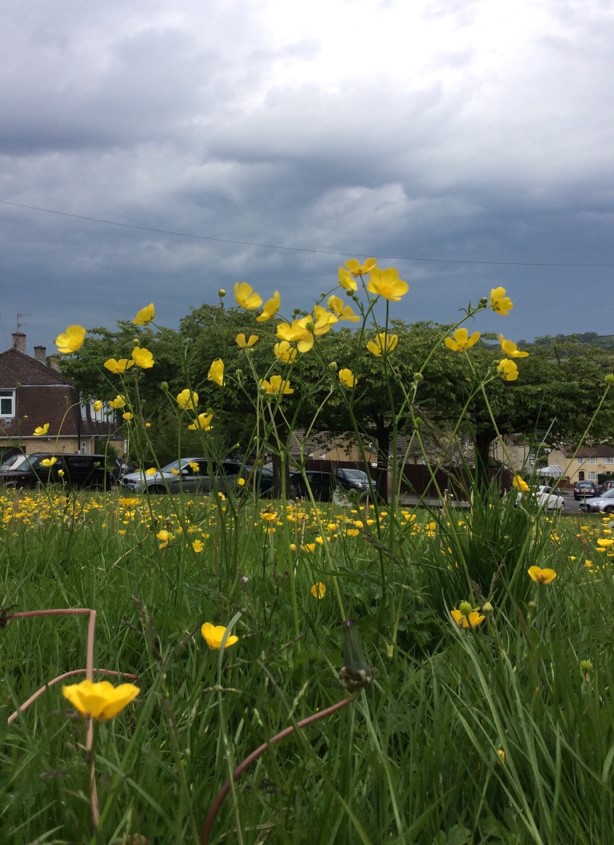 Meadow Buttercup have been particularly apparent.

As the trial only applied to part of the Green, it is hard to comment exactly. The unmown area does not hinder walking, playing or dog walking. A football would roll rather slower compared to a mown area. This could actually be a benefit at the bottom of the Green as it might prevent balls rolling into the road.

For only a four-week period it would not appear to be a problem. It is notable that Bath & north East Somerset (B&NES) Council have left the Weston Rec, including the football pitches, unmown for all of May.

Were the 'no mow' period to be extended, thought would need to be given to how recreation can continue, ie maintain regular mowing on a portion thorough-out.

For those sensitive to hay-fever from grass mowing, a reduced mowing schedule can be a relief but it is a 'catch 22' in so far as more pollen may be present.

Goldfinch particularly enjoyed the unmown area as they like small seeds such as those on dandelion heads.

Green woodpeckers particularly enjoy ants and again they focussed on the uncut areas.

Wagtail may have been attracted by the increase in insect levels.

These are far more challenging to do. Honey bees and other bee varieties have been observed particularly on dandelion heads. There are doubtless many other things feasting on the extra food but many are very small (like small blue beetles) and I cannot name them all!

The weather has affected caterpillars a lot this year, so it is hard to judge the benefit to butterflies. 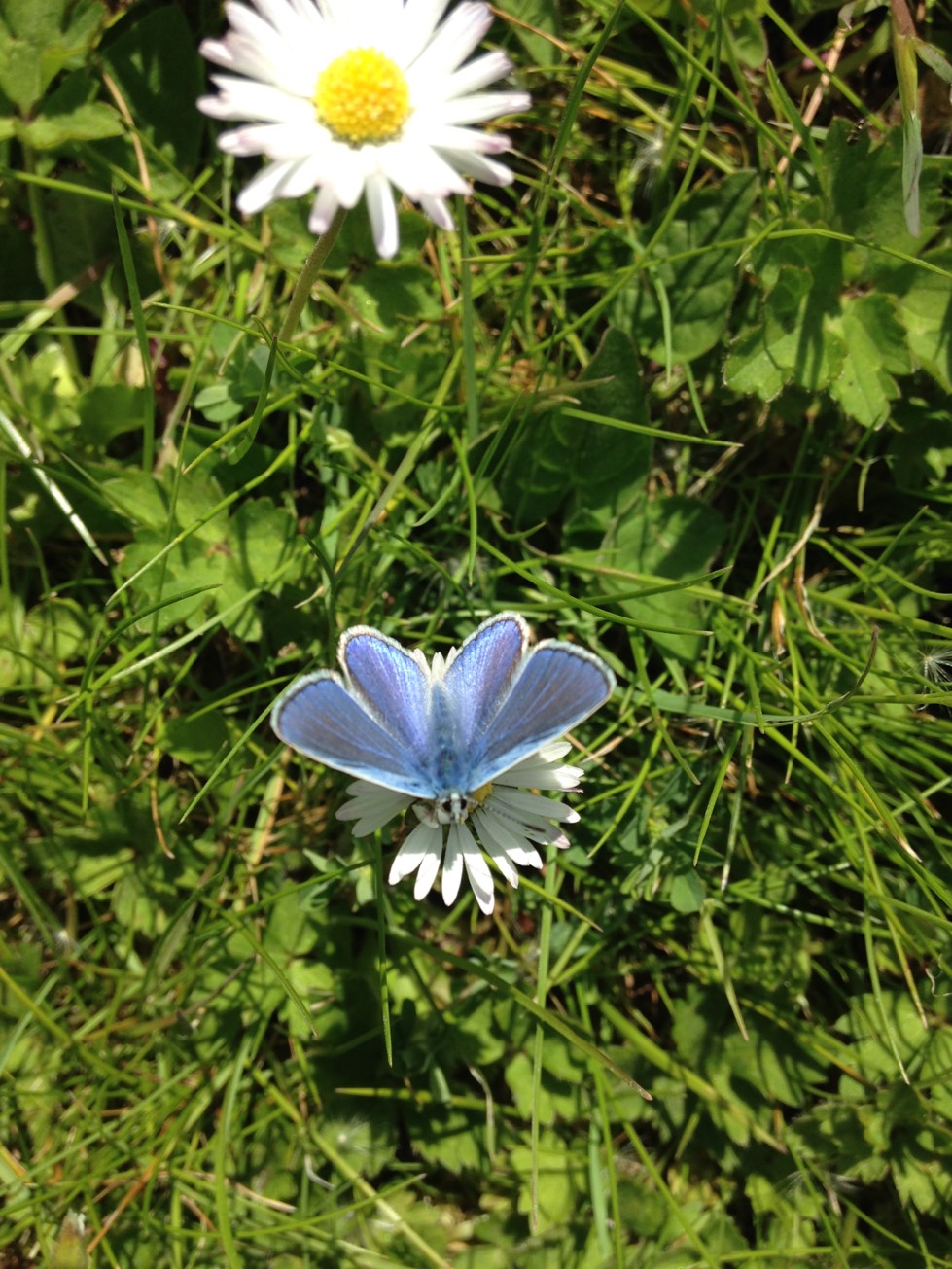 Conclusions and looking ahead

One thing to consider is there are some plants yet to flower (such as the oxeye daisy, hawkbit and most clovers). A longer no-mow period would probably result in further diversity.

Another is that shorter stemmed flowers will still prosper in mown areas where the cut is not too tight. The exact length would require some research, but it is probably between 50 and 100mm. This length may not be appropriate for front gardens, but may be more readily accepted on communal spaces.

One benefit of longer vegetation from a visual point of view is that it appears more drought resilient. Thus it remains green during long dry spells rather than going yellow as can be the case with short grasses. Long hot and dry spells are becoming increasingly common. 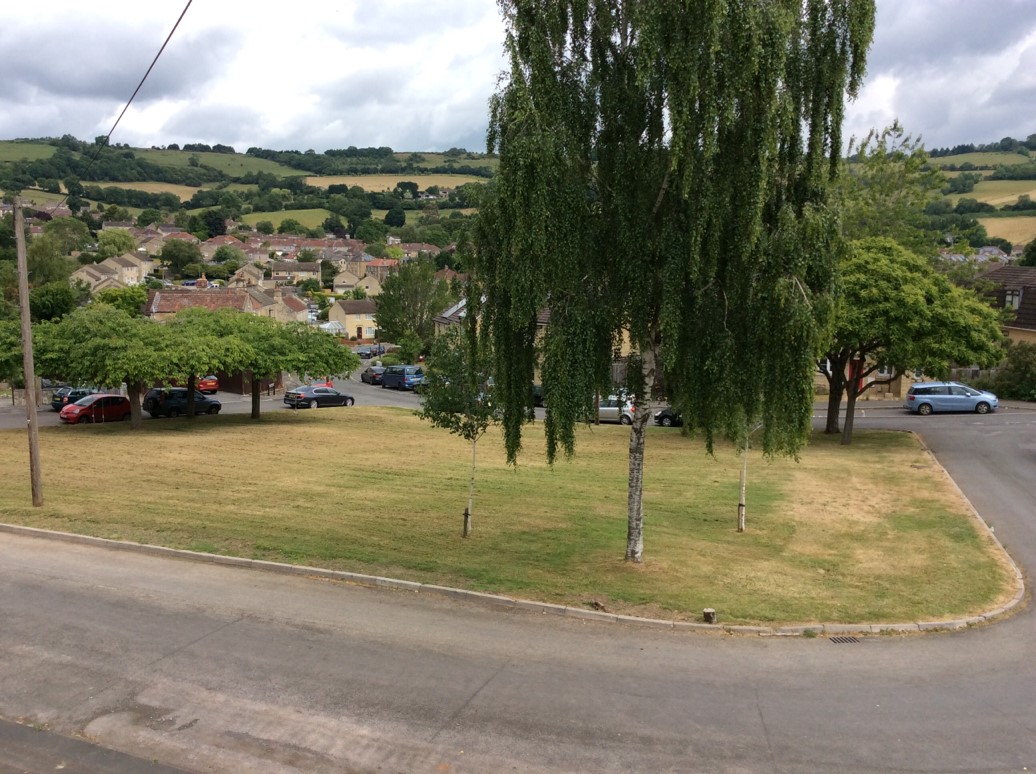 Above: drought stressed grass is not particularly attractive

A possibility for next year is to leave the whole perimeter of Southlands Green un-mown and just mow a large circular area into the middle.

There is also a smaller pocket of communal land adjacent to the Green which could be used for a longer trial of no-mowing. It could even be grown as a meadow, with the resulting hay collected and sold as animal food or for bio-digestion. B&NES Council have invested in equipment to enable this in the wildflower areas of the Weston Rec.

Plantlife publish several good guides to verge management which set out various mowing options. They are very applicable areas such as Southlands Green.

It is great that Curo is looking at this. The 'green estate' is extensive and thus has great potential to boost biodiversity at a time when it is urgently needed. I hope the scheme can expand to more of Southlands next year as this will increase the benefits.