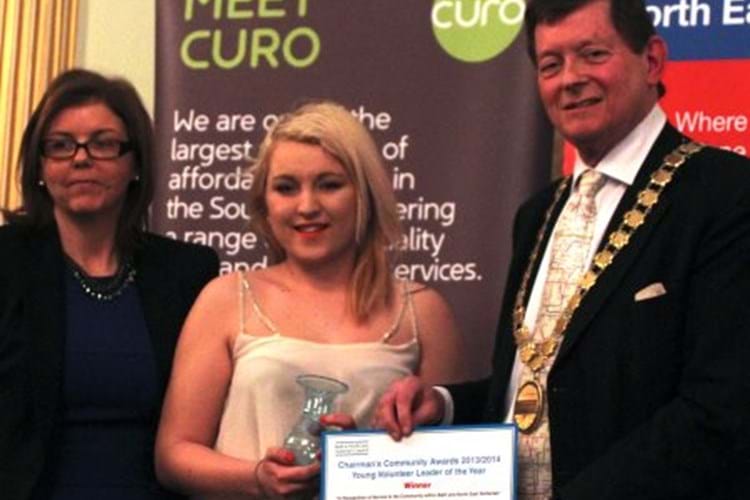 Keynsham teenager Phoebe Bidgood has won the Young Volunteer Leader of the Year Award at the 2013/14 Bath & North East Somerset Chairman’s Community Awards. The awards, which were presented at a ceremony held earlier this month in Bath, recognise volunteers, community leaders and organisations that make a positive contribution to their local community.

Phoebe, 17, has been the driving force behind the Curo-sponsored Neighbour Hoodies project in Keynsham known as Timeout Task Force. The Neighbour Hoodies are young people who get together to tackle odd jobs like repainting and repairs through to bigger community projects, making a positive difference where they live and challenging negative stereotypes of young people.

Phoebe told us: “It’s brilliant to win this award with the help of Curo. Being a Neighbour Hoodie in Keynsham has given our group far more recognition with members of the public for the work we do and the difference we make in our neighbourhoods. The extra-curricular activities are great for our CVs and have already opened doors for me personally in getting work experience.”

Phoebe has been Chair of the project for two years and regularly represents young people in Keynsham, speaking at local Police and Community Together (PACT) meetings and promoting the Neighbour Hoodies through events like Keynsham Youth Fest. Along with other Neighbour Hoodies in the area, Phoebe proactively asks local people how young people can help make a difference to their neighbourhoods.

Curo’s Neighbour Hoodies initiative is about helping children and young people give something back to their neighbourhoods. Joining Curo’s scheme means the group has access to extra support and resources, including their Curo-sponsored hoodies.

Curo’s Community Initiatives Officer, Jo Bellotti, helped to set up the Neighbour Hoodies scheme: “The Neighbour Hoodies scheme is about giving young people like Phoebe more opportunities to make a real and lasting difference where they live. Phoebe is full of energy and ideas and really cares about her neighbourhood. We’re so pleased that she’s picked up this top award.”

Councillor Neil Butters, Chairman of the Council, said: “The volunteers, community leaders and businesses that make such a fantastic contribution to the local community and inspire others to get involved to shaping the future of their community have been celebrated through these awards. I’d like to thank everyone who made a nomination and congratulate all of those people who received an award.”

If you live in Keynsham and have an idea or project that the Neighbour Hoodies could help with them please do contact Mark Willcox, Keynsham Town Council Youth Worker, on 0117 9868683 or email youthworker@keynsham-tc.gov.uk.