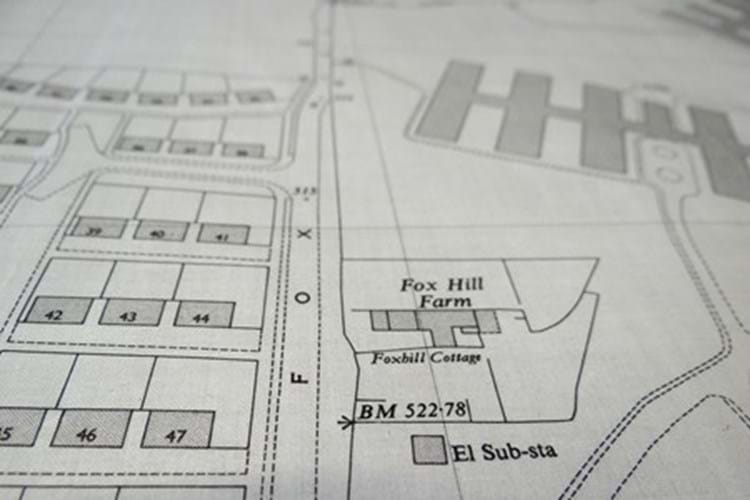 Pictured: Map of Foxhill from May 1949, Bath Record Office

As the plans for Mulberry Park progress, I have been seeking to uncover just what did happen inside those unassuming MOD huts at Foxhill?

The search has taken me to museums and archives in Bath and London, such as The Museum of Bath at Work, The Imperial War Museum and the National Archives. Keen to learn from people’s memories, I have spoken with people who worked at Foxhill to build a picture of what life at the Admiralty and MOD site was like. Visiting community groups such as Knit & Natter and Foxhill Art Group has helped to highlight the impact the MOD has had on Bath today.

Foxhill, or ‘Whisky Foxtrot’ to its security team, has been home to thousands of staff since it was built in the 1940s. The Admiralty arrived in Bath in 1939 following the announcement of war on 3 September, in fear that London would be a target for German bombing. By 24 September, over 3,000 Admiralty staff had arrived in Bath on trains from London. With little warning, Admiralty workers found themselves staying in spare rooms in an alien city at the start of the Second World War.

Hotels and schools became offices, with Foxhill providing much needed office space in the early 1940s. Originally, the site was surrounded by farmland, with sheep and cattle for neighbours. Staff at Foxhill were involved in the design of warships and submarines, drawing plans and producing wooden models of the nation’s fleet.

One of the most important accomplishments of the Admiralty’s time in Bath was its involvement in designing Mulberry Harbours. These floating harbours were crucial to the defeat of Germany following D-Day in 1944, providing calm water to unload materials to troops. The Civil Engineer-in-Chief created plans for the project from an office in Kingswood School. This achievement is now celebrated in the naming of ‘Mulberry Park’.

After the Second World War, Foxhill continued to thrive as a base for work of national importance. From Foxhill, engineers continued to design submarines and underwater nuclear weapons during the Cold War as part of the Trident and Polaris programmes. Work at this time was top secret, with messages taken by car from Foxhill to London sometimes the safest form of communication.

From speaking with previous employees at Foxhill, it was an enjoyable place to work with staff parties and a fondness for The Foresters pub – otherwise known as ‘H block’. It is clear that the MOD had a large impact on Bath, with many people knowing someone who worked at either Foxhill, Ensleigh, Warminster Road or the Empire Hotel.

I have been working for Curo as a placement from Bath Spa University, where I am studying for a Masters in Heritage Management. Curo approached the leaders of the Heritage course to help uncover more about the history of Foxhill. This project has given me the opportunity to engage with a range of museums and archives and enhance my skills in historical research and community consultation.

If reading this blog post has triggered any memories of working or living around the MOD at Foxhill, please get in touch. We would like to add your memories to our Foxhill archive.

If you have any photographs or objects that you would be willing to share with us then even better. Please email mulberrypark@curo-group.co.uk for more information about how you can be involved.

Find out more about Curo's plans for Mulberry Park.