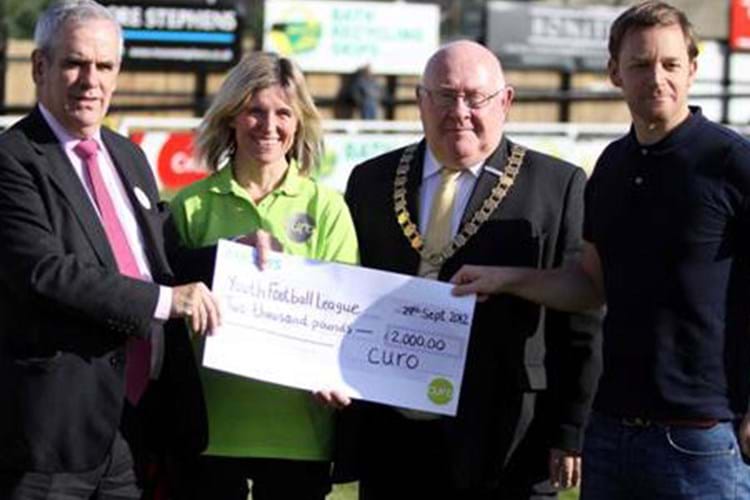 On Saturday 29 September the winners and participants from last year’s Somer Football League took to the pitch at half-time in Bath City’s Saturday fixture to receive trophies and medals in front of hundreds of supporters.

Curo, which has sponsored the league under its old name of Somer for many years, also announced the launch of a new youth football league for the 2012/13 season with the Bath City Football Club Community Sports Foundation and Bath & North East Somerset Council’s Youth Service.

Around 70 young people from across Bath  took part in last season’s league, which held competitions in two age categories.

Winners of the 11-14 age-group trophy were Southside All Stars (pictured). The 15-19 age-group trophy was won by Walcot PYP in a match refereed by Bath City FC’s club captain Jim Rollo, who has been a stalwart supporter of the league.

The victorious Walcot PYP team was captained by Khaled Harwood, who said: "We have really enjoyed taking part in the five-a-side league and being able to represent our respective communities. The league has provided us with the opportunity to engage in a positive, worthwhile activity, and we have been able to showcase our talent individually and as a team. Thanks to the sponsors – Bath City Football Club Community Sports Foundation and Curo – for supporting the league, with a shout out to the youth workers at Percy Community Centre and Southside Youth Hub.”

This year the new league has forged strong links with the University of Bath who will be providing female coaches to give high quality coaching, something which in the past has proved especially popular in attracting girls into the game. Bath City FC players will also be on hand at times to assist in coaching and nutrition advice. Southside Youth Hub and B&NES Youth Service will be providing essential resources and providing the venue for major games as will the Percy Community Centre.

Curo Board member and Chairman of B&NES Council, Cllr Rob Appleyard, presented the medals and trophies with Curo Community Initiatives Officer Jo Bellotti. Jo said: “At Curo we’re proud to have supported this league for the last three years. We set up the league to offer all young people the opportunity to participate in a sport at no cost to themselves. The new league promises to be the best yet, with lots of support from sports experts at Bath University and Bath City FC.”

Anyone interested in joining the league, either as an individual or a team, can find out more from Jo Bellotti on 01225 366145 jo.bellotti@curo-group.co.uk.