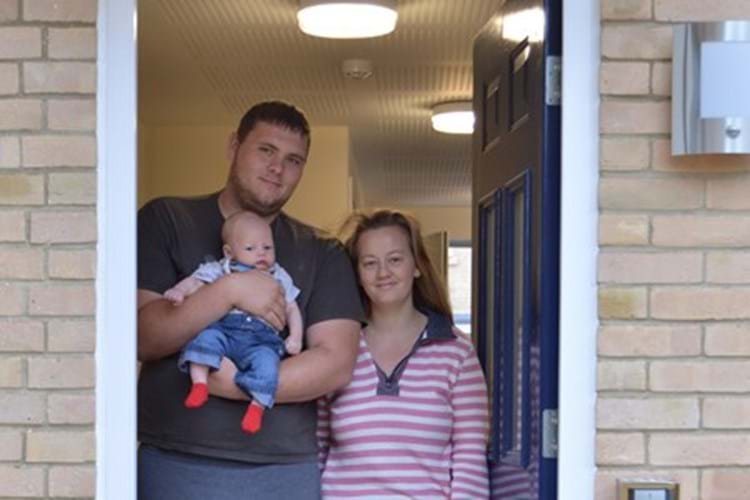 Wiltshire couple William and Sharday Clarke are settling in to their new Curo apartment in Hilperton with their new baby, six-week-old Elliott. Until recently the chances of finding a place of their own as a family looked slim, as William explains:

“Sharday and I were living in temporary accommodation, a single room in a hostel. We’d been trying to rent privately and got help from the local council with a bond to help us put up a deposit. We were told we’d secured a place, but that fell through and I thought we’d be stuck in the hostel for even longer.

“Then, on the day our son was born, I got a call in hospital from Curo asking us if we’d like to view a new apartment at The Pastures in Hilperton. From that call to getting the keys was really smooth and quick, and we’re now enjoying having the space, privacy and peace of our own home as a family.

"...we're enjoying having the space, privacy and peace of our own home as a family."

“We like the neighbourhood and have met some really nice people on the street already. All our family are nearby and Sharday’s mum lives just five minutes up the road, so it’s great to have lots of help at hand with our new arrival!”

William and Sharday are both from the local area: William grew up in nearby Bradford-on-Avon and Sharday has lived in Trowbridge for most of her life. Money has been tight, but things are looking up with William embarking on a business opportunity with his brother, building and installing garden shelters.

The Pastures is a new development in the village of Hilperton, near Trowbridge, which has planning permission for 184 homes across the site. Under Wiltshire Council’s affordable housing contribution Curo is making 44 of these new homes possible through lower-cost social rents.

The affordable homes are a mixture of apartments and houses, including six much-needed four bedroomed family homes. The Clarkes are among 30 families who have now moved into their new homes, with the last home due to be completed in April 2016.

Join us in saying Yes to Homes

Curo to deliver first Passivhaus homes in B&NES
Curo to build 154 new homes in Yatton, North Somerset
Curo resumes construction operations
Supporting the community through the Coronavirus lockdown
Our construction sites are closing Friday 27th March
Curo welcomes residents to new affordable homes in Midsomer Norton just in time for Christmas
Rent on time - never be in arrears again
National developer Crest team up with Curo to build new homes at Hygge Park
"Shared Ownership was the only way I could do it"
Public exhibition will show plans for 47 new affordable homes in Filwood, Bristol