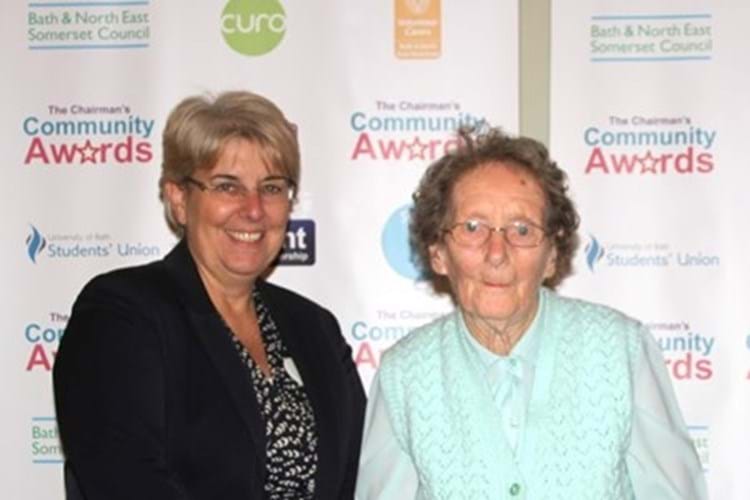 Bathampton resident Betty White has had a big year – celebrating her 90th birthday and being named Good Neighbour of the Year in the Curo-sponsored Bath & North East Somerset Community Awards.

Betty was nominated for the award by Luciano Pinto, Curo Sheltered Housing Officer at St Nicholas Court where Betty has lived for 26 years: “Betty has more energy and go than people half her age,” said Luciano. “She looks in on her neighbours to see if they need anything, often fetching the papers for those who can’t easily get to the shops. Betty is well known in the village – people realise how much she does for her neighbours and often seek her out to ask after their friends.”

Born in Widcombe in 1925, Betty went to Widcombe School and then St Luke’s School. At 15 Betty left school, working first at a restaurant and then a shoe shop in the city before joining the Ministry of Defence where she worked until she retired.

Betty celebrated her 90th birthday with a party at St Nicholas Court – the 99 cards she received testament to the impact she has on so many of her neighbours’ lives.

To find out more about Curo’s retirement housing or Independent Living Service - which is available to anyone, whether a homeowner, private or Curo tenant – give us a call on 0300 123 2461 or visit our care and support pages.