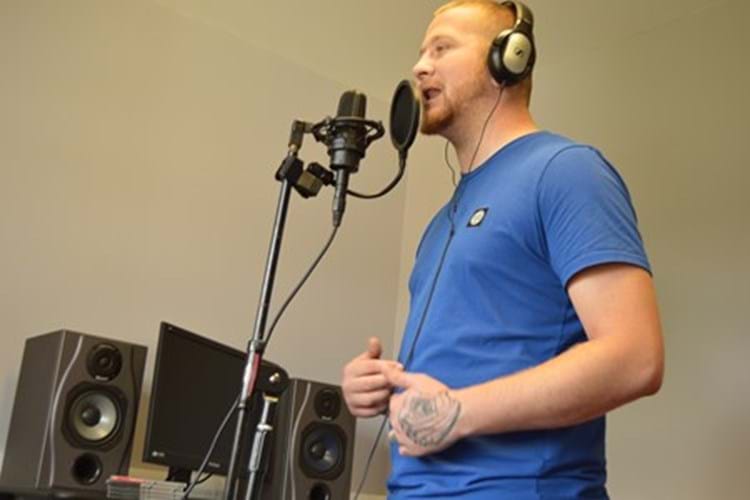 “I left home, no phone, no money… really, I hadn’t a clue,” raps Taelor Newport on Second Chance, a track he wrote about his experience as a homeless teenager.

Taelor tells his story with wit and honesty through his music, which he says is best described as grime – a genre influenced by London urban artists like Dizzee Rascal.

Currently living at Curo’s Bath Foyer project in Twerton and working at a city-centre restaurant, 23-year-old Taelor explains how he’s getting his life on track and turning back to making music again, something that helped him through difficult times as a child.

“When I was at school, a group of friends used to see older Bath groups like YMP and we wanted to follow in their footsteps,” says Taelor. “I started going to a youth club called Riverside in Snow Hill. That really got me into music. I didn’t think I could rap, but I wanted to enter their talent competition. So I wrote a song about a girl, I practiced as much as I could... and I won.”

This positive musical journey was taking place against a backdrop of a troubled home and school life: “Things weren’t going well at home and I was being bullied at school. I first left home when I was about 14, staying with various mates and my cousin. Eventually I was persuaded to move back home but I could only put up with so much. When I was 16 I walked out again.”

The years that followed were hard, but Taelor has high praise for the support professionals who’ve helped him. These include workers at the Bath-based DHI partnership which Curo belongs to.

Since arriving at the Bath Foyer, which has its own small music studio, Taelor has rekindled his passion for music. He linked up with Andrew Lawrence at the neighbouring Rec House Studio to record new tracks including Second Chance.

Having already won three Bath talent shows as a youngster, Taelor recently returned to the stage in July, performing at Twerton’s Got Talent. Although he didn’t add to his collection of wins, he was described as 'extremely talented' by judges.

Today, Taelor has a job he loves and is getting on well with his family again. Curo's Working Well project, which helps young people gain life and employment skills, has supported Taelor to get back into playing rugby regularly. “The support here at the Foyer is important to me. Now I’m ready to move on and I’m looking for a place of my own.”

How could Working Well support you?

Rent on time - never be in arrears again
Placement is ticket to a new career
Curo's Independent Living Service: Jon's story
Team effort transforms garden at Curo homeless service
Making a house a home
Help in the struggle to find a home
Get back in control with Passport to Housing
A home for life
Helping people to live well across generations
Meet tourism superstar and proud social tenant Martin Salter