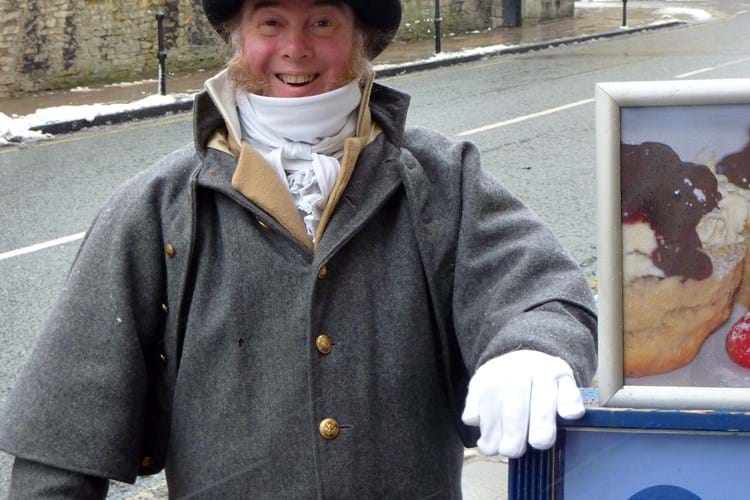 Meet Martin Salter, a Curo tenant with a fair claim to be one of the most photographed people in England.

“People say I’m the most photographed person in England,” says Martin. “It’s all good fun and I get to meet people from around the world. I’m even learning a bit of Chinese.”

Martin has another claim to fame, having recently made the finals of the 2018 Tourism Superstar Awards.

“It’s nice to be recognised through these awards and to know I’m doing a good job,” says Martin of his award nomination. “If I can bring a bit of joy and happiness to people’s lives then that’s all that matters.”

Martin has held his unusual job for 11 years, previously working as the ‘Bath Pumper’, serving the city’s famous spa waters to visitors. He has rented his Georgian apartment in central Bath from Curo for 33 years. Social housing has enabled him to live in a city that regularly ranks amongst the least affordable places in the country.

“I like my Curo home,” comments Martin. “It’s quiet and it’s in a nice period building. The neighbourhood has a good mixture of people and it’s very central. That means I can walk to work in full costume, and that does attract some attention!”

As the biggest housing association in the World Heritage City of Bath, Curo is unusual in owning over 500 historic properties like Martin’s home. Most are apartments in Listed Georgian townhouses which include homes in the world famous Circus and The Royal Crescent, both a stone’s throw from the Jane Austen Centre where Martin works.

Curo is backing the National Housing Federation’s Benefit to Society campaign which is telling the stories of people like Martin who live in social housing, and the many and varied contributions they make to society. Check out www.benefittosociety.co.uk to find out more about this important campaign that’s tackling social housing stereotypes.

Martin is passionate about the tourism industry and the important role it plays in the economy. He is one of over 9,000 people employed in tourism across Bath & North East Somerset, a district which attracts around 4.8m day visitors a year.

“Tourism is one of our biggest employers, so it’s important that it does well,” says Martin. “Everybody in tourism deserves a bit of recognition.”

The Tourism Superstar Awards were set up seven years ago by Mirror Travel and tourist board VisitEngland to celebrate the unsung heroes of the tourism industry.

Voting for the awards will close on 20 March with the overall winner announced at the end of English Tourism Week on 24 March.

Martin says he is looking forward to the award ceremony in April… all eyes will be on his choice of outfit for the big night.

To cast your vote, visit www.visitbritain.org/tourism-superstar-2018

Rent on time - never be in arrears again
Placement is ticket to a new career
Curo's Independent Living Service: Jon's story
Making a house a home
Help in the struggle to find a home
Get back in control with Passport to Housing
A home for life
Helping people to live well across generations
"On the road to my dream job"
‘Passport to Housing’ has changed my life