Look out for our Special Olympics Curo van 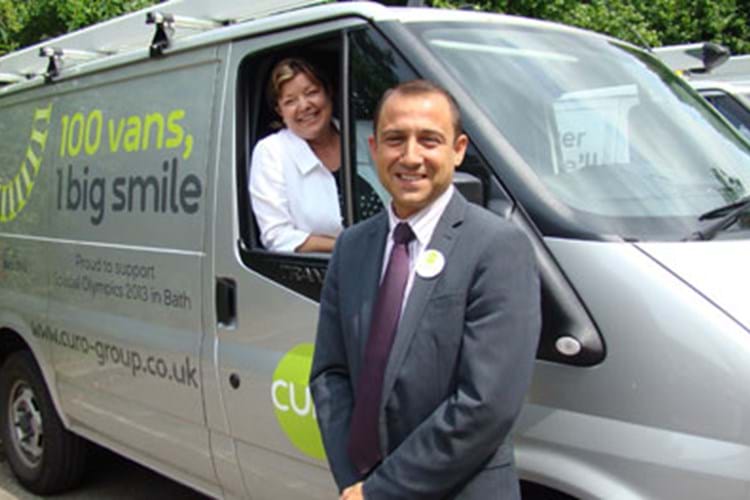 We are proud to announce that we are an Official Games Supporter for the 2013 Special Olympics GB National Summer Games.

Held in venues across Bath & Bristol from 28 August to 1 September, and recognised by the International Olympic Committee, Special Olympics is the largest disability sports organisation in the world for people with intellectual disabilities of all ages and abilities.

As a Bath based company, Curo is keen to support the event, and want it to create local legacies which will enable people with intellectual disabilities to participate and compete in sporting activities in the region over the next few years.

We are using our fleet of vans to promote the 2013 Special Olympics National Summer Games. Many vans will have branding across the back advertising the Games and one special van has been given a complete new look, incorporating the SOGB branding and the slogan “100 vans, 1 big smile”. Chief Executive of the Special Olympics GB (SOGB), Karen Wallin, will be in Bath on Tuesday 23 July to launch the van.

We're asking anyone who sees the van out and about, to take a photo and tweet it using the hashtag #curovan; all entrants will be entered into a draw to win the opportunity to be a medal giver at the Games.

As well as this event held every four years, SOGB deliver a community based, year-round programme which is for all ages and all abilities. This provides vital opportunities for integration, not only in terms of sport but also of health, wellbeing, education and social inclusion. A key part of this is the development of sports legacies. The aim of the legacies is to create sustainable groups and sports activities across the region for children and adults of all abilities with intellectual disabilities - creating opportunities to get involved, gain skills and widen social networks as well as to compete and grow self-esteem.

1.2 million children and adults in Great Britain have intellectual disabilities. It’s the most common disability in the UK and it’s predicted to grow by 14% by 2021. Currently only 100 athletes compete in three Special Olympics groups in the whole of the South West and nothing is available in the Bath or Bristol area. However this is unrepresentative of the estimated 104,800 people with intellectual disabilities in the South West area (20,500 of which are school age) with nearly 3,600 in BANES alone (580 of which are school age).

A Legacy Committee has been formed from expert regional representatives to ensure the maximum effect is achieved from the funding generated. These comprise local businesses, education, local authority sports development, English Federation of Disability Sports (EFDS), voluntary organisations (i.e. Mencap & Lions) together with The University of Bath who are hosting most of the Games. The Legacy plan aims to initiate new clubs, fund spaces and sports coaches and encourage competition between individuals and teams, all of which are designed to transform people’s lives and be sustainable for future generations.

Find out more about the Special Olympics