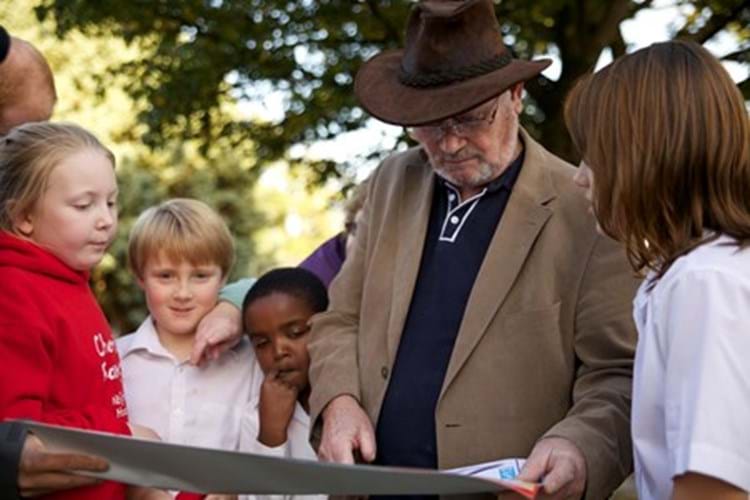 A Bath resident described as an inspiration in his community has reached the finals of the national Housing Heroes Awards, having been nominated for the award by Curo.

John Richardson is the driving force at Chandler Close in Weston and one of just six people from across the UK to be shortlisted for the Inspirational Resident of the Year category in the awards run by the Chartered Institute of Housing.

John, who has lived in Chandler Close for 13 years, has brought together people of all ages in the surrounding streets to form a vibrant neighbourhood that has already collected numerous awards for their many community initiatives.

One of John’s many achievements is the creation of the Chandler Rangers (pictured, with John). Part of Curo’s Neighbour Hoodies project, the Rangers are a group of local children who want to make a positive difference where they live through community action. John has helped the Rangers create an award-winning community garden which the children tend with their neighbours. Some of the older residents at the Close then teach the children how to cook their fresh produce, with the resulting meals enjoyed at the numerous feasts and celebrations John organises for the community.

Curo Community Initiatives Coordinator Jo Bellotti has supported John with a number of these initiatives. Jo said: “At Curo we wanted to nominate John for this award because he’s an outstanding example of how individuals can make a big difference where they live. John has done an enormous amount to bring together everyone, young and old.

“He’s a well-known, friendly face in his neighbourhood and encourages many older residents to venture out from their homes and take part in the activities he puts on. The list of achievements John’s helped to make possible is impressive – he truly is an inspirational housing hero.”

Through the residents’ association, John has led many other practical initiatives, for example residents have set up their own car parking system and have taken on management of services like cleaning their community hall and maintaining shared garden spaces.

We'd love to hear from Curo residents who would like to know more about the support available to make their neighbourhood a great place to be. Contact Curo on 01225 366000 or visit www.curo-group.co.uk/getinvolved.

The winner will be announced at an awards ceremony in Manchester on 27 June 2016.

Curo Hot Topics - Looking after your estate
Customer Choice Award 2020 Who's your star?
Show off your lockdown gardening creations - enter Curo in Bloom
Enter the fun with the Curo in Bloom 2020 competition!
Supporting the community through the Coronavirus lockdown
Join us to celebrate the 75th Anniversary of VE Day
‘Love Snow Hill’ launches in Bath
Taking care with Curo's caretakers
Recycling your Christmas tree
Curo & residents join forces to spruce up new meeting room