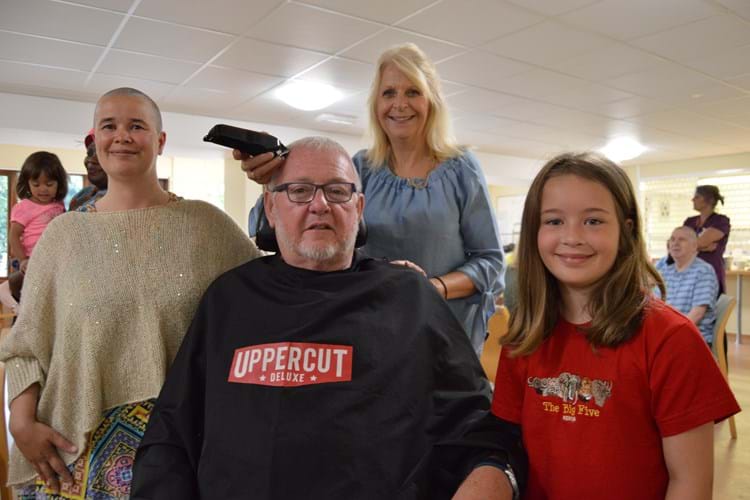 A group of residents at Curo’s St John’s Court in Bathwick have had their heads shaved to raise money for Jump Up, a local charity dedicated to supporting children and young people with arthritis and related conditions.

The new haircuts, sported by St John’s Court residents Graeme Norris, Peter Butler and Colin Symes, were part of a fundraising effort that’s seen residents raise £657 through their regular coffee mornings and a charity auction, smashing their target of £500.

Peter, who is Chair of the St John’s Court Residents’ Association, said: “We heard about Jump Up through one of the carers at St John’s Court whose seven-year-old niece Meilla is supported by the charity. Meilla is one of a number of children in UK who have childhood arthritis and we’re so pleased she could come to our fundraising event.”

Meilla's mum, Sally, joined the trio in having her head shaved on the day, with Meilla operating the clippers.

Sally said: "Our daughter Meilla was diagnosed with Juvenile Idiopathic Arthritis (JIA) and Uveitis at under two years old, at the time she was one of the youngest in Britain. Uveitis is a very serious eye condition associated with JIA that affects a low percentage of Juvenile Idiopathic Arthritis sufferers. Meilla has been in and out of hospital for over five years mainly at the Bristol Children’s Eye Hospital where she participated in a new drug trial for her condition.

"Bristol Children’s Eye Hospital have provided an excellent service to our family and others at a very difficult and upsetting time in our lives with having a sick child in the family. Meilla has been amazing in how well she has coped with her illness and all the hospital visits she attends and has remained positive throughout.

"She is now seven and is very pro active about JIA and it was her choice to inform her classmates at her school earlier this year of her illness which was extremely brave and her school and classmates were very understanding and supportive."

Jump Up is a charity dedicated to supporting children and young people with arthritis and other related conditions in the South West of England and South Wales.  The Team supports the work of the paediatric rheumatology service in the Bristol Royal Hospital for Children.

Donations can be made to Jump Up via www.aboveandbeyond.org.uk by naming the ‘Jump Up’ fund, number 54166.