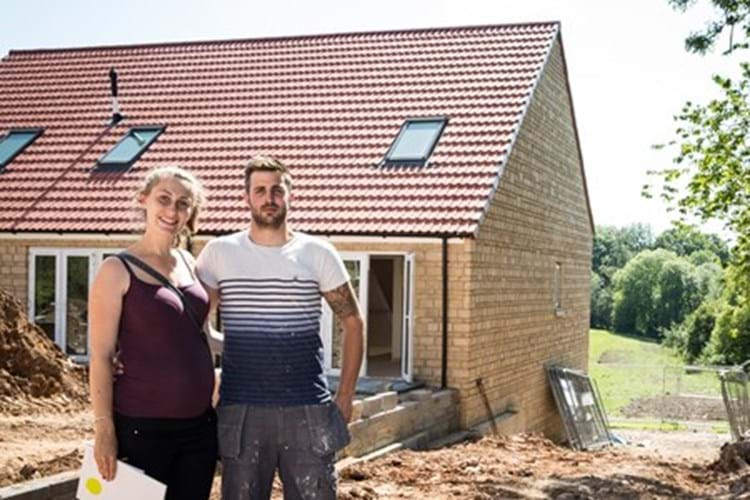 Nine new homes for local people are approaching completion in the village of High Littleton, thanks to a scheme being showcased by Curo as part of Rural Housing Week (6-12 July), which is highlighting the housing issues facing rural communities.

Curo is putting the finishing touches to this rural development which will include several sought-after family houses and has transformed a disused brownfield site in the village centre.

Among the first people to move in to the new homes will be carpenter Daniel Flower, his partner Jess Ashfield (pictured) and their 18-month-old daughter Indie.

Daniel, pictured with Jess, said: “It’s amazing to get the opportunity to live where I grew up and to be around family, with all the extra support that gives. We know everyone in the village and there are so many facilities on our doorstep, not just for Jess and me, but also for the little ones to go out and play with the local school and recreation grounds nearby.”

National figures released by the National Housing Federation during Rural Housing Week show that housing associations like Curo house around 11% of the country’s population, and match every £1 invested by the taxpayer in the building of new homes with £6 of their own money.

The new homes will be made available on low-cost rents to people like Daniel who have a connection with the local area. Daniel grew up in High Littleton but has been unable to find a place of his own in the village, instead living with his parents whose house is next to the new development. The couple are expecting their second child this autumn.

“There's an urgent need to increase the provision of affordable housing in villages like High Littleton as young families and those on lower incomes are priced out," said Gerraint Oakley, Managing Director of Curo Homes. "The average weekly rent of a three-bedroom house in High Littleton is around £183 and the average house price is £272,284.

"This prices out around two-thirds of those seeking their first home. We’re working with local authorities to increase the supply of housing and these nine new homes are just a few of the 250 affordable homes we are delivering every year across the region.”

Bath & North East Somerset Council has provided £535,000 for the project in High Littleton. Councillor Marie Longstaff is Bath & North East Somerset Council’s Cabinet Member for Homes & Planning: “I’m delighted to see these much-needed rural affordable homes nearing completion. High Littleton is typical of villages across our district with high house prices and low turnover in existing affordable housing, which means many people are forced to move into neighbouring towns to find a home they can afford.

"These homes will make a huge difference to the families who move into them, providing secure, affordable homes for them to raise their families whilst remaining in their rural community.”

Gerraint Oakley added: “We’ve worked closely with the local community, with High Littleton Parish Council and with Bath & North East Somerset Council to make these new homes possible and are grateful for the support that’s been shown for this scheme. We’d particularly like to thank local people for their patience during the building works.”

Building work is being carried out by Markey Construction. Work started in June 2014 with the homes scheduled to be completed by August 2015. As part of the work Curo will replace the original village pump, have repainted a local church hall which is used as a nursery and helped to provide a new bus shelter.

Looking for a home?

Curo to deliver first Passivhaus homes in B&NES
Curo marks Rural Housing Week with completion of 36 new homes in the village of Clutton
Curo to build 154 new homes in Yatton, North Somerset
Curo resumes construction operations
Supporting the community through the Coronavirus lockdown
Our construction sites are closing Friday 27th March
Curo welcomes residents to new affordable homes in Midsomer Norton just in time for Christmas
Rent on time - never be in arrears again
National developer Crest team up with Curo to build new homes at Hygge Park
"Shared Ownership was the only way I could do it"