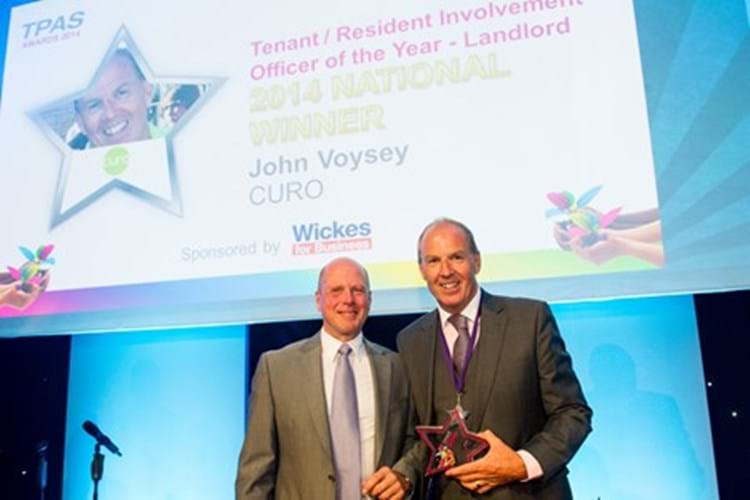 Curo colleague John Voysey, a man dedicated to bringing people together to make a difference in their neighbourhoods, has been crowned a national champion at the Tenant Participation Advisory Service (TPAS) Awards held on 10 July in Warwickshire.

John picked up the title of National Resident Involvement Officer of the Year at the 2014 TPAS Awards, having won the regional awards for the south of England earlier in the year.

The TPAS Awards recognise people across England who have demonstrated a real commitment to tenant empowerment and improving opportunities for involvement.

John, who lives in Midsomer Norton, joined Curo, in 2006 following a lengthy career in the police force.

Julie Evans, Curo Director of Neighbourhoods, said: “We’re incredibly proud of John and the team of great colleagues he works with. John has forged amazing and positive relationships with customers, colleagues and other partners. He’s someone who always delivers above people’s expectations. TPAS is a highly respected organisation, so this endorsement of our work means a lot to us.

“Curo now has more residents than ever actively involved in making their neighbourhoods great places to be – that’s largely thanks to John’s inspiring and tireless efforts to engage with our customers.”

Jenny Osbourne, TPAS Acting Chief Executive added: “TPAS is passionate about connecting people to achieve great communities. In this era of coregulation it is vital that tenants and landlords work together to achieve and sustain positive change and impact on their communities.

"The judges have been inspired by the number of exceptional projects and initiatives across England. The standard of submissions across the country this year has been incredibly high. Thank you to all who entered the awards. Our huge congratulations to all the winners and those who were shortlisted!"

Curo customers interested in getting more involved in their neighbourhood can contact Curo’s Resident Involvement Team on 01225 366162 or visit www.curo-group.co.uk/getinvolved.