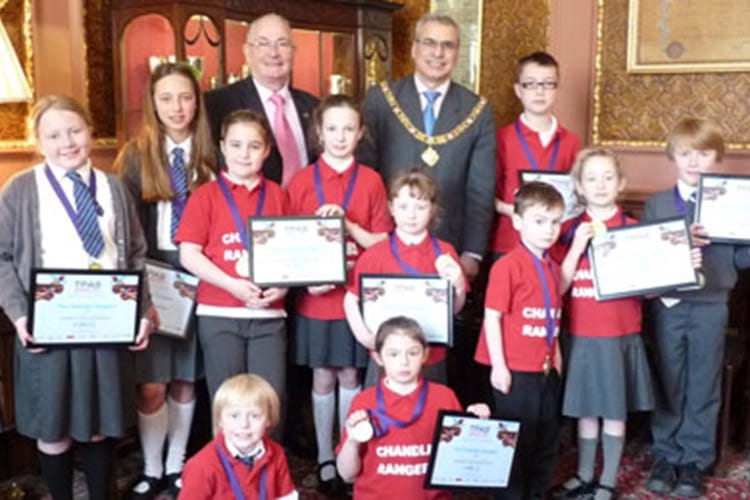 A group of community-spirited children in Weston, Bath have been honoured by the Mayor of Bath for their success as finalists in the prestigious Tenant Participation Advisory Service Awards 2013.

The Rangers reached the Southern finals of the TPAS Awards for their work in bringing together people of every age in their neighbourhood in Weston, Bath.

The Rangers were started with the help of local resident John Richardson (pictured, back left) as a way to provide young people in the Chandler Road area of Bath with something positive to do and to help to break down the barriers and misconceptions that can exist across the generations.

The Rangers, aged between four and 11, carry out many good deeds in their neighbourhood, making their own decisions about where to focus their energies. They hold their own meetings, inviting adults along to talk about any issues and find solutions.

The group was nominated for the award by Curo who have supported the scheme. The Mayor of Bath, Cllr Andrew Furse, heard about the Rangers achievements and invited them to a special reception in The Mayor’s Parlour at the Guildhall to present the children with their finalists’ medals.

Cllr Furse said: “These children are a shining example of what young people can achieve by working together in their neighbourhood. I am looking forward to thanking them for being so community-minded at such a young age and to congratulating them on reaching the finals of the awards.

"I am sure their parents, their schools and their neighbours are all very proud of these mini-ambassadors for Bath. There may well be a future Mayor of the City in the Rangers.”

Curo Community Initiatives Officer, Jo Bellotti, said: “The children are so proud to have reached the finals of this prestigious award scheme and enjoyed an amazing day in London at the awards ceremony. The Rangers are a brilliant example of how the energy and enthusiasm of young people can make a huge difference to our neighbourhoods. We are so pleased with the Rangers’ success and to have been able to support them.”