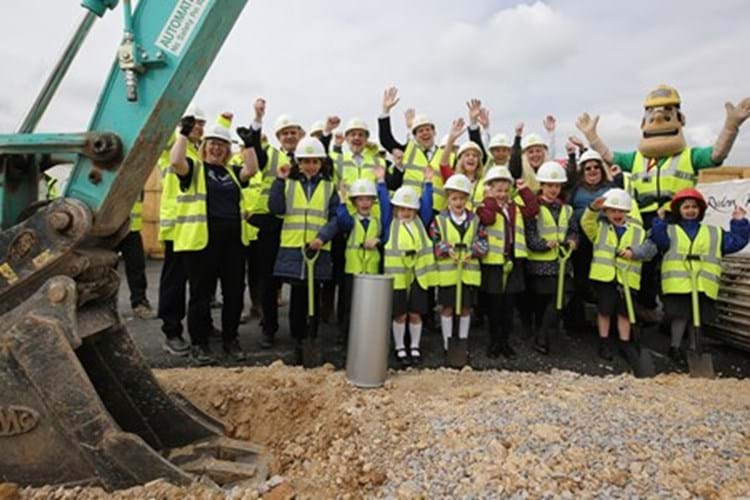 Pupils from Combe Down Primary School today buried a time capsule on the site of the new community hub, primary school and nursery at Mulberry Park, Bath.

The time capsule was buried as part of a celebration to mark the start of construction at the landmark £10M building by Curo and Rydon.  It will remain buried for at least 50 years and will give future generations a glimpse into life in 2017.

Children were invited to suggest items for the time capsule that represented life in Bath in 2017.  Their suggestions including:

The suggestion that caused the most amusement among the children came from William, aged 7 (pictured).  He suggested including a picture of US President Donald Trump, adding “it was just the first thing that came into my head”.  The picture was included alongside architect’s plans for the new buildings and pictures created by the children.

Commissioned by Curo and designed by internationally renowned architects BDP, the community hub will sit at the heart of the Mulberry Park development fronting onto a new public square, within easy reach for residents of Combe Down and Foxhill.

Gerraint Oakley, Managing Director of Curo Homes said: “We’re delighted to mark the start of construction at the community hub, underlining Curo’s ongoing investment in the local area.  It’s been wonderful to welcome the children from Combe Down Primary School to the site, along with local residents who have helped us to shape the plans for these iconic buildings.”

The community hub is being built by Rydon for Curo.  Paul Barber, Rydon Construction’s South West Regional Director said: “The time capsule is a great way to mark the start of work with Curo as we look to the future of the new hub and the many positive benefits it will bring. It’s a pleasure to welcome the children and local people on site for the event and we look forward to working alongside them as a considerate contractor in their community.”

The celebration was also attended by local MP Ben Howlett, Council leader, Tim Warren, Combe Down ward councillors, Cherry Beath and Bob Goodman and local residents who have worked with Curo to develop plans for the community hub.

Designed as a beacon for the local community, the new community hub will include a café, meeting rooms, multifunctional spaces and an enterprise area with lettable space for a range of businesses.  The hub, primary school and 70-place children’s nursery will open at Mulberry Park in September 2018.

Meet the families helping to design the energy-efficient homes of the future
Curo to deliver first Passivhaus homes in B&NES
Curo to build 154 new homes in Yatton, North Somerset
Curo resumes construction operations
Supporting the community through the Coronavirus lockdown
Our construction sites are closing Friday 27th March
Curo welcomes residents to new affordable homes in Midsomer Norton just in time for Christmas
National developer Crest team up with Curo to build new homes at Hygge Park
"Shared Ownership was the only way I could do it"
Brand new show home to launch at Mulberry Park